François Hollande seeks to reassure UK and City of London 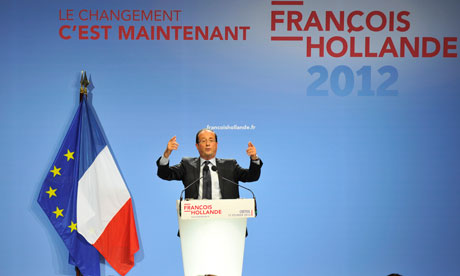 François Hollande , the Socialist favourite to become the next president of France, said he wants to woo Britain back into the heart of Europe and sought to reassure the City of London it should not fear his drive for more regulation of the financial world.

"We need Britain to feel part of Europe," Hollande told British correspondents ahead of a high-profile visit to London next week. But he added that France could never have accepted David Cameron's attempt to create a "sanctuary" from financial regulation for the City of London in the new European treaty.

Hollande brushed aside the fears of the political right in London that he would be dangerous for the City. He said he was not "aggressive", nor seen in France as very leftwing, and his drive to regulate finance was no more than Barack Obama's keynote speech to Congress. "You could say Obama and I have the same advisers." He said his stance on further regulation for the financial sector was in line with "public opinion" in Europe and was similar to all other French presidential contenders, including the rightwing Nicolas Sarkozy.

Hollande, a jovial, consensus-building rural MP who led the Socialist party for 11 years, is forecast to win the French presidential election in May. When at a recent rally, he named the "world of finance" as his main "adversary", it was an example of the broad, anti-banker campaign-rhetoric of all French presidential candidates, including those on the right. His manifesto increases taxes on the very rich, who have largely escaped much of the French tax burden. But he is seen as a centre-left, moderate Social Democrat whose hands are tied by France's debt crisis and the gaping hole in state finances. His project is the most muted of any Socialist candidate before him and contains none of the traditional leftwing promises to raise the minimum wage or salaries, but undertakes to rein in the public deficit. His most concrete measure on banks – a law to separate their loan-making business from their "speculative operations" – are already under consideration in the UK and the US, and Sarkozy has trumped Hollande by announcing a financial transaction tax for France, the so-called Tobin tax or Robin Hood tax.

But Hollande's lavish praise of Tony Blair was revealing about his own political orientation and his potential style of running France. For years, Blair, New Labour and the third way were heresy to most French Socialists. Hollande said Blair was pleasant "and so intelligent he didn't need to be arrogant". He added: "The first lesson to take from Blair is how long he lasted ... Second, he was able, after a long period of Thatcherism, to reinstate education, health and the public sector ... Then he succumbed to the dominant idea that the markets could regulate themselves and the notion that the markets and [economic] liberalism in themselves could be a factor for growth ... We saw the consequences."

Hollande brushed aside suggestions that he was a leftwing ideologue and dismissed comparisons with the initial fear greeting François Mitterrand's election in 1981. "The 1980s was a different era. People said there would be Soviet tanks on the Place de La Concorde. That era is over, it's history. It's normal there were fears then. There had been 23 years of the right in power, the cold war was on and Mitterrand nominated Communist ministers to government. Today there are no Communists in France. Or not many ... the left was in government for 15 years in which we liberalised the economy and opened up the markets to finance and privatisations. There is no big fear."

He reiterated his long-standing demand for change to the European treaty on economic integration, but appeared to temper a call for total renegotiation, stressing he wanted to add a clause about economic growth, either inside or outside the treaty. He said it would be for the French parliament to ratify the treaty after the election and he would not put it to a referendum.

Unlike Sarkozy, Hollande said he speaks English "like a Frenchman, with an accent, but I speak it". He said he knew Britain and had "no apprehensions or prejudices" about it.